I’ve been a loan shark since I was 8 years old.

It all started when my sister asked me if she could borrow my necklace and I said, “Sure, as long as you can return it to me in the pristine condition in which you borrowed it,” knowing full well that she was incapable of such a feat.

As fate would have it, a fortnight later I discovered my missing necklace hidden and in irreparably broken condition, shame and embarrassment written all over the mangled scene.

I sent my debt collectors known by the names of mom and dad to right this wrong, but my sister had already paid them off. It’s a hard lesson to learn, but one every loan shark needs to know: you can’t count on nobody but yourself when it comes to collecting what’s owed to ya. There’s a reason loan sharks are lone wolves.

My sister learned not to cross me again when I retaliated by eating a piece of very dry cake with just my hands in her unmade bed. After a long, hard day of being 10, she unsuspectingly crawled into remarkably crumby sheets that night. Truly my most genius passive aggressive sister fight, as the unknown evidence left accusations of misconduct inadequate to hold up in sibling court.

The fear and spine curdling displeasure of crawling into an itchy bed of cake crumbs every night did its trick. A new necklace appeared on my dresser the next day. Suddenly, all I saw was profit in the form of plebes. 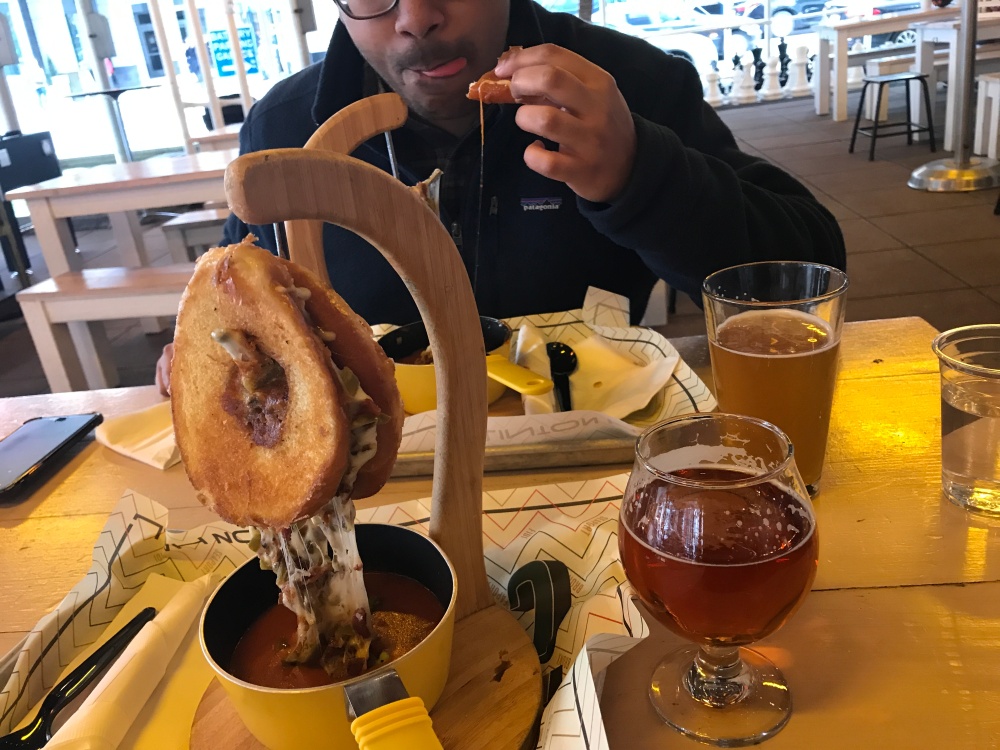 Fast forward 15 years later. My passion for greenbacks is still coursing through my veins as I find myself hustling in Manhattan’s Financial District. On this particular day, I was swaggering through the streets of commerce, slated for a lunch meeting with an old chum whom I hadn’t seen since leaving my job at #Safavieh. I was looking for Oj, the man who taught me everything I know about doing as little work for as much money as possible. His lack of social skills make him tough to consort with, but he’s a valuable crony to have on the streets. Despite all his words and actions, I know Oj is a loyal friend.

When Clinton Hall was suggested as a place to reminisce over the early days of our camaraderie, I just about laid an egg out of excitement. Clinton Hall is an epicurean’s dream, specializing in extravagant dishes for every meal of the day.

Clinton Hall is notorious for its fascinating paraphernalia and esoteric comestibles. See: The Clinton Hall Burger Challenge, ice cream stuffed waffles topped with pieces of cake, goopy grilled cheese doughnuts, and ample pub games of giant proportions aimed at getting people off their devices and back to interacting with humans.

I imagine this sporty locale would have been, as the youths say, “popping” during an afterwork happy hour, but a midday luncheon left a great deal of breadth between patrons.

In our liquored merriment of $5 happy hour beers (an unheard deal of in FiDi), Oj and I both opted for the Grilled Cheese Doughnut, a numinous beauty brandishing bread and cheese on a modern crucifix, acutely setting the tone for the religious experience that is eating a grilled cheese doughnut.

Upon being served, Oj’s sandwich had already slopped into its tomato soup like a dog eager to be de-skunked. While appearance influences 90% of my desire to order any food item, the disintegrating sandwich still maintained its gluttonous appeal by displaying steeple-like cheese drip qualities, the embodiment of a sybarite’s food dreams.

The GCD found a way to incorporate almost every taste known to the human tongue: a sweet glazed donut with salty cheese, fatty bacon, spicy jalapeño and savory tomato soup; A transcendence of any and all boundaries previously set on the world of bread and cheese sandwiches through an explosion of multifarious flavors.

True to his reputation of being habitually starving, Oj descended on his lunch with a breathtaking singularity of purpose. Flawless technique. The kind of élan vital that powers legends.

This was no ‘formal business meeting over lunch’ meal. This was a three utensil dish. A doughnut grilled cheese so distended with viscous mozzarella it had to be cut with a fork and knife before it slowly met its impending demise in a bowl of velvety tomato soup.

The meal did not so much inspire religion as it seemed to be religion itself. The perfect dish for a late October day and heated outdoor seating. 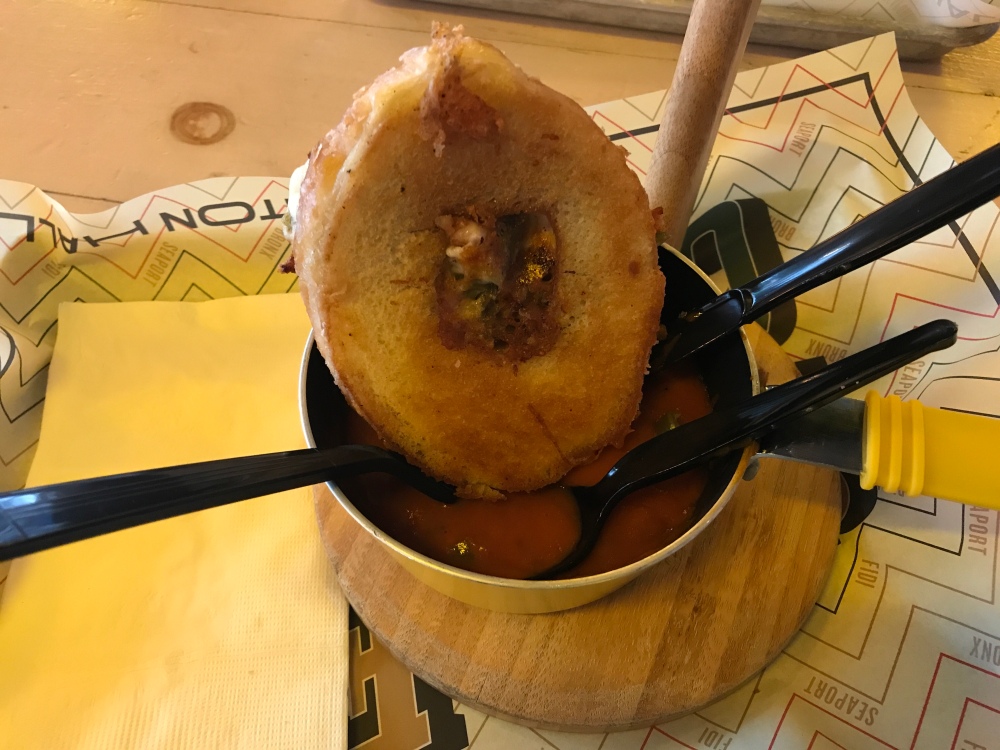 The GCD was pleasant, but not enough for the insatiable Oj. He also ordered a soft pretzel with cheese that was easily mistaken for mustard but nonetheless a greasy masterpiece.

As for the $5 brews, my pale ale had an irony palette to it that tasted like blood, but apparently that’s what beer people call an IPA. I was informed we quaffed high caliber hops, but my expertise on differences in quality of beverages is limited to lactose-free milk and tea.

While scraping up every last drip of donut stew from my personal trough, I was humbled by Clinton Hall’s well-marketed food gimmicks. Even the most cunning of loan sharks can fall into an obvious ploy for money if it involves a doughnut and cheese.

I was humbled, yes, but also suspicious that this was an outside job orchestrated by a greater power aiming to put on donut on every table for every meal. Was this mere sandwich ingenuity by Clinton Hall’s chefs? Or was it perhaps another meal as we know it succumbing to the mothership of donuts?

Turning up my collar and slipping into a dark and suspicious ally where sleazy deals happen, it felt like just another day on Wall Street. But I never let my guard down. This diversionary tactic of targeting dinner instead of dessert was so blunt it was easy for the unsuspecting civilian to overlook. This was another meal yielding to the doughpocalypse.

Flavor: 10/10 – I dare not call it a mouth-splosion… But you would be hard pressed to find another sandwich that can take you to church while sitting in the world’s financial capital.

Bang for Buck: 8/10 – For $15 the GCD was delicious but not as filling as the price comparable burgers on the menu, hence the additional $9 pretzel. Happy hour boasted a small but diverse menu, an important attribute for those looking to return to work absolutely SMASHED.

Aesthetics: 7/10 – Bolstered by the heated outdoor seating and pub games, the Clinton Hall FiDi location was under construction with a dull decor palette inside. However… the service was incredibly slow, taking approximately 1.5 hours for a small meal as two waitresses seemed not to know who was serving us. A preposterous amount of time considering the vacancy of tables around us.