Sometimes the food world tries to put two very opposite but respectively awesome things together to make one super-mega awesome dish. But two incredible flavors don’t always guarantee a tasty lovechild. For example, chocolate on a pizza. Or a peanut butter cheeseburger. Ice cream and lobster? Bleh.

Beer and fried dough? Surprisingly, a donut hole in one combo.

Brewnuts is a donut bar. A hip and happening hangout in Cleveland, Ohio where you can sip a cold one with the boys while simultaneously adhering to your strict carbs-only diet. Hearing that alone had me up at the crack of 10:30 a.m. to try one of these delicious babies taking the Insta world by storm. But wait, could it really get better? Could my artisanal goods obsession also be appeased in this trip?

Oh yes, yes indeed. One more thing about Brewnuts, the donuts are MADE with CRAFT BEER as a MAIN INGREDIENT.

Obviously small batch, local craft beer based donuts made in the heart of Cleveland are a hit. Because what are two things Ohioans love? Beer and Ohio.

Known as Cleveland’s first Donut Bar in the historic Detroit Shoreway’s Gordon Square neighborhood, Brewnuts is right near Edgewater and the ever trendy Ohio City, aka Cleveland’s brewery scene.

Here’s what you need to know about going: There is a parking lot right across the street. If it’s full… I don’t know I didn’t have that problem. They also have morning service and then break until encore hours, with donuts and beer served at both. After all, you can’t eat donuts and drink beer all day if you don’t start in the morning! 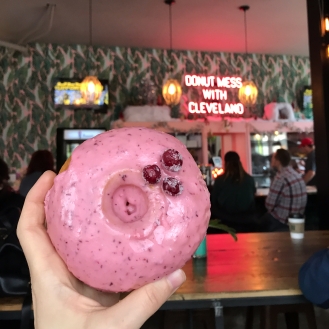 Let’s get to the experience.

Upon walking in, I saw a crowd of mixed ages, with older couples enjoying some brewskis and younger gal pals there for the ambiance.

Fresh donuts were being brought out as I waited in line, and the debate of how many I could reasonably get began. My mom said spending $18 on a half dozen donuts wasn’t reasonable… and that I could only pick four. I don’t know where she got the idea that I was reasonable when it came to buying donuts, but since she was paying, I conceded. Sometimes you have to compromise what you want to get the minimum of what you need =(

We decided on a pumpkin cheesecake, a strawberry sprinkles, a Captain Crunch and a cranberry.

The strawberry sprinkles is yeast donut featuring Samuel Smith Strawberry Organic Ale with a strawberry cream icing. I can’t say I tasted the beer in any of these, but i knew it was there in my heart. Perhaps the power chai donut featuring Platform Beer Co’s Maria vanilla chai cider would have a more beer-y taste?

(Side note – donuts made with beer are safe for kids and pregnant women. All of the alcohol cooks out!)

The Captain Crunch donut kind of cut up my mouth, but the cereal milk icing was amazing! The pumpkin had a really nicely textured filling and the cranberry donut was fun because the berries popped when I bit them. Also, it was the prettiest.

After trying all four, the strawberry was my favorite. Sweet, classic and fluffy! Every one of these catchily-named “dones” was ginormous, which made the $3 price a bit better.

Made with beer, served with beer, donut flavored beer. Is there any combination of donuts and beer that Brewnuts can’t perfect?

They’ve recently been promoting a cherry donut pie goose ale, which I didn’t get because it wasn’t even noon yet and I was meeting my grandparents for hibachi in half an hour. I’d be very curious what the ratio of beer flavor to donut flavor is like. From what I’ve heard, it is tart and sweet, but I highly recommend you belly up to the bar and try one for me.

My mom also got a cup of their Phoenix Coffee. I don’t care for coffee ever, but she said it was fine. Maybe if she went for the “make it boozy” option of adding a shot of fireball, peppermint or baileys to any coffee or hot coco it would have been more noteworthy.

Brewnuts may be small, but their menu is mighty! There are 16 different Ohio beers offered, plus some classic ones for those not into the craft flavors. They also offer vegan donuts, and I saw a picture of a maple bacon donut filled with proper pig pulled pork. Not sure if that was a special edition but wow.

Or you can stop by for a fun event! Brewnuts recently threw a Britney Spears themed party for the star’s 36th birthday, and they know how to serve up good times during sports seasons! Stop by at the right time and you might be able to try their triple dog dare: a shot of fireball, a can of PBR and a glazed done, all for $5!

Check out their playful Instagram, too, which is quite popular with the youths.

Flavor: 9/10  Definitely would go back for some more of this icing. I wasn’t able to taste the beer, but the fluffy texture was divine and the variety of tastes was great, too.

Bang for Buck: 8/10  Many people on yelp complained that $3 for a donut was too expensive. I almost broke my throat laughing. Oh Ohio, I’ve missed your cheap cost of living. But given the size and great flavor (and my mom’s wallet), $3 isn’t too bad.

Aesthetics: 10/10 – My dones came on a tray, but I think if you get 1-2 they come in a cute little basket. There’s also the “Donut Mess With Cleveland” sign, donut-inspired art, flamingo wallpaper and great lighting. Even if it’s busy, you won’t be hard pressed to find good lighting for the gram.