I’ve always wanted to go to ‘the state that’s full of surprises’, but I’ve wondered, after the Beluga Whale Exhibit recommended as the #2 attraction on Google, what else is there to do? Well, be warned, Connecticut is quite a devilish little minx of a state. This quick trip turned out to be quite the adventure…

Connor and I were headed to Connecticut to see his younger brother, Riley, dance in Shaping Sound’s After the Curtain show with Travis Wall and Lex Ishimoto. I actually got to meet the cast after the show and honestly, I felt talented just standing next to them. That’s how incredible the performance was.

Below is proof I met Travis Wall/proof I’m cool, and the few pictures I took around cloudy and grey Yale, my grandfather’s alma mater. I sent my grandpa these pictures and he told me my dress was very ‘comely’ on me, which is pretty much the next best compliment I could have hoped for after ‘pulchritudinous’.

When first I found out Connor and I were going to New Haven, I turned a quick visit to see Riley into a full blown day trip in a matter of minutes. I do this all the time, I don’t know why Connor still gets huffy about it. The show was at Shubert theater, which just so happened to be less than a mile from the Yale Campus, which just so happened to border… DONUT CRAZY!!!

First things first, how does a newly carless nomad get there? The Greyhound was $14 each way, but also the Greyhound… Amtrak was quick and comfy! But $46 each person each way.. Then I remembered the Metro North is a thing and it goes to New Haven and it’s only $17.75 each way! Oh, happy days!

After a two hour train ride, we arrived at Union Station in the tiny, historic and incredibly walkable city of New Haven. It had been 25 days since my last donut and my vitals were quickly fading. I needed to get to Donut Crazy, and I needed to get there fast.

The Donut Crazy in New Haven is located right next to Pantagonia, or as we overheard the local Yale boys refer to it – PataGUCCI.

Back in 2015, Donut Crazy realized that making donuts requires the same artistic vision and delicate care as crafting pieces of hand forged glass for an art gallery. Each dollop of buttercream frosting and drizzle of fondant was placed with such intention and love, I was surprised to find the bakers had not autographed their masterpieces. A true aesthete’s paradise, Donut Crazy’s donuts are art, the walls are adorned with more art, and there’s chocolate milk on tap. 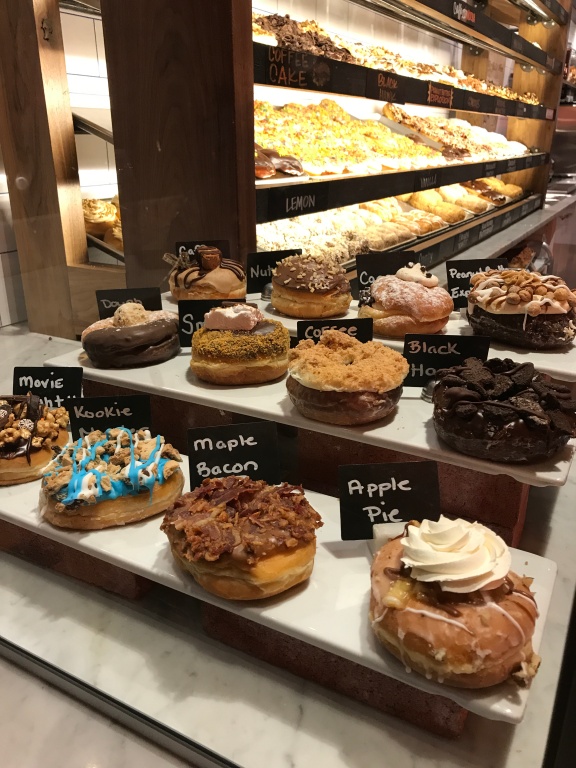 Standing in front of this display, I was beside myself with the glut of opportunity. I’d heard so many rumors that their stuffed cruffins were real, and here I was staring them in the chocolate chip face.

I did the ‘crazy deal’ – buy five donuts, get one free, but I could have easily filled a box with the ‘even crazier deal’ – buy ten donuts, get two free. Donut Crazy creates over 45 varieties of donuts each day to feed the “adventurously hungry”, aka me. For more donut-porn pics, I highly recommend their Insta.

The donuts that won my heart with their beauty are as follows: French Toast, Peanut Butter Explosion, Kookie Monster, Black Hawk, Blueberry Butternut, and Cannoli. It was a tough call that quite literally took me over ten minutes to decide. The Caffe Mocha was a favorite of our cashier, but a donut filled with coffee infused cream cheese, topped with a coffee glaze, biscotti, coffee bean brittle and chocolate drizzle seemed like too much caffeine for my frail nerves. 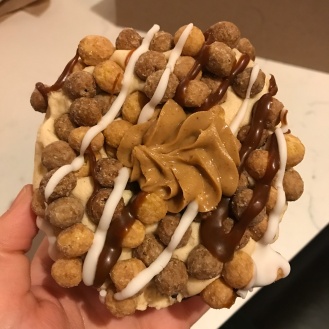 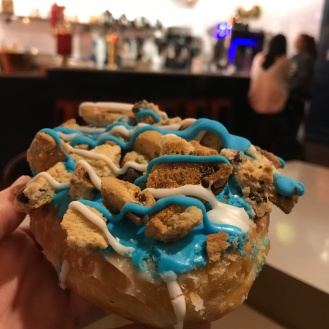 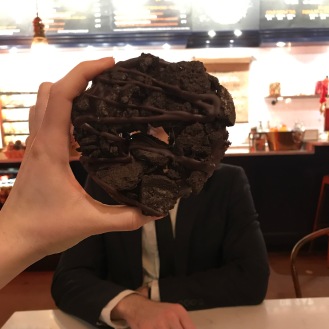 I like the photo of the Black Hawk because it looks like I’m on a date with a well-dressed chocolate donut.

My favorites to eat were the French Toast because it was a spiced update on a modern classic, the Blueberry Butternut because I liked how the toasted coconut crunched, and the Cannoli with Impastata-style ricotta because I’d been craving a cannoli for months.

I thought the Peanut Butter Explosion was too much. There was a layer of peanut butter buttercream frosting as thick as the chocolate donut itself, and when I tried to take a bite the Reese’s Puff topping threatened to plug my nose. It was better two days later when I microwaved it for breakfast at work and the frosting got melty and the cake part was soft, unlike Krispy Kreme’s that get chewy or hard when microwaved. 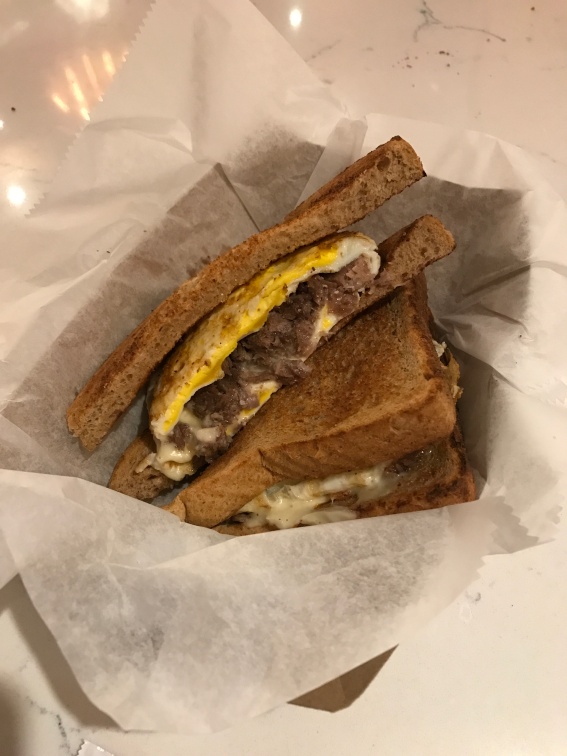 Connor got the steak and eggs grilled cheese for dinner, because unlike myself, he cannot survive solely on bread and sugar. When I sat down to indulge in some good old fashion glutton, I saw on the menu there was a donut-go-crazy grilled cheese sandwich, which is two glazed donuts with your choice of cheese in between. I wish I had gotten it because I’ve seen donut grilled cheeses in a couple of places, and my interest is quite piqued, to say the least.

Let me tell you, I felt like Rocky Balboa trying to finish off this box. Just like the all-American boxer, my showdown wasn’t one about winning; it was about pushing myself against all odds and going further than I ever could have imagined.

“It’s your right to listen to your gut; it ain’t nobody’s right to say no.” – Rocky

Even though my gut was begging me, “No.” And I’m pretty sure if a health professional knew what I ate, they, too, would tell me, “Good God, no!”

I have no regrets about giving it my all. Not even when Connor thought it would be fun to go to Insomnia Cookies with his brother instead of catching the last train back to New York at 11:42pm. Nor when I was sitting in the New Haven train station until 4:37am, when the next train back to Grand Central finally arrived. I made the most of those miserable four hours, feasting on the carcasses of my donuts in tights, heels and smudged make up. And when we finally got back to our apartment at 8am and woke up at noon, I thought, “Wow, I could really go for a 5th donut! Good thing I got the ‘Crazy Deal’!”

This small coffee shop turned mecca of crazy confection concoctions is finding remarkable success with their marketing: the world is going absolutely bonkers for donuts right now. I can really relate to Donut Crazy’s name. If you saw my camera roll, you’d know I was crazed with the donut bug. Just in case a blog dedicated to donuts left you with any doubts.

Flavor: 8/10 – But this is partially my fault because I always go for the most extravagant donut, not necessarily the best tasting. And then I eat myself sick. Every time.

Ambiance: 9/10 – A little dark for pictures, but I loved the art work all over (considering putting similar pieces in my apartment) and the hip industrial accents. It wasn’t too busy on a Saturday night, but I could see seating being a challenge.